Mission War is a capture-the-flag type game that pits up to 200 players against each other in a single arena. Generally the nation that uses the best teamwork wins. Players are usually effective only in groups of 3 or more.

After the fall of the Sage Tower, Capella and Procyon decided to pursue their principles and established two different nations, each named after themselves. The nations come into conflict with each other because of their opposing principles.

Quick instructions if you are a newbie to Mission War:

Your character must be at least level 52 and be aligned with either the Procyon or Capella nation.

To choose a nation, you must:

Nation War is divided into tiers according to character level:

Procyon and Capella both have their own color armor and a different look of outfit depending on their class. 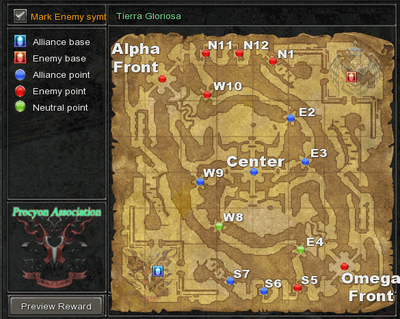 Another part of Mission War is Force Towers, which are structures that players build to make bases easier to defend. There are two kinds of towers, portable and stationed.

Portable towers are purchased from the shop (N) and can be built anywhere. The size listed by the tower type is the size of its area-of-effect (AoE). A Large tower has a much bigger AoE than a Small tower.

You can obtain and wear a Legacy Weapon when you become level 52. The Legacy Weapon is only available during Mission War it is dropped by killing a Legacy Guardian. Legacy weapon gives you these stats:

Points are scored in plenty of ways:

The formula to calculate points is: [Offensive score+ Heal Amount + Defensive score +(Force Tower Build time(sec) x 600]/10,000
So every 10k damage you do or take earns 1 score. An enemy nation kill or your own death will automatically reward you an additional 10k damage dealt (1 point).
Press the V key and click the Details tab to see your current points.

Once a week, the result of the Mission War (Lv170 ~ Lv190) will determine which nation receives the Nation Bonus. This war is known as Bonus War

All members of the nation that win Bonus War receive the following bonus for the next seven days.