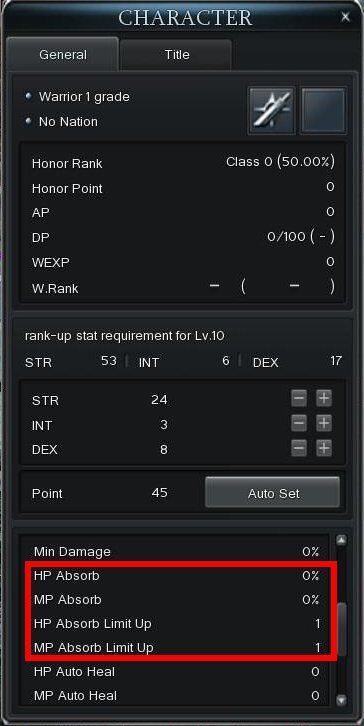 Leeching allows you to regain HP/MP while damaging mobs. This is possible through vampiric gear and absorb gear.

Absorb percentage is the amount of HP/MP you can regain of the damage you do to a mob per hit.

Imagine you equip one Life Absorb Ring +3 (+5% HP Steal). This means you steal 5% of the damage you do to an enemy per skill.
So if your skill does 500 damage to a mob, you would be able to regain 25 HP per skill from that mob.

Unfortunately this is not that simple and here is where the Absorb Limit comes into play.

The Absorb Limit is the maximum amount of HP/MP you can steal from an enemy per skill.

By default the base Absorb Limit is 10% of your current level (Lv/10). So when you are level 140 you can steal a maximum of 14 HP/MP per skill.
So if we take the earlier example, you would be able to steal 25 HP, but because of the cap you only steal 14 HP. That's not too good.

To raise the cap you can equip items that add HP and/or MP per hit. These items have a line in their description that says "Max HP Steal per hit + X". This adds a certain amount of HP/MP to your leech limit-cap.

For instance, add a Vampiric Earring +3 to your Life Absorb Ring +3, This earring gives +25 HP/MP max steal, if you were to be Lv 140, your current Absorb Limit would be: 14+25 = 39 (where 14 is your base Lv/10), thus now you would be leeching up to 39 HP/MP per hit, just keep adding until you're on your current max leeching capabilities.

There is also a maximum on the Absorb Limit. This basically means there is a max amount of HP/MP you can regain with leeching gear. This cap is 5% of your max HP/MP. So if you have 2000 HP and 500 MP, you can leech a maximum of 100 HP and 25 MP no matter what type of vampiric gear you are wearing. Only by raising your HP/MP with buffs or gear can you increase this Absorb Limit cap.

Now lets say you are surrounded by a group of 5 mobs and you use a skill that damages each of them with 500 damage, that means you leech 5x27 HP = 140 HP per skill you use on that group. That way you heal yourself while damaging mobs.