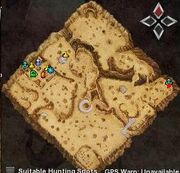 Entrance to the Forgotten Ruins in Desert Scream

To receive the warp-code for this map, the player must complete the following quests:

This area is the first available that is a war zone. You get 1 honor point for each mob kill. Other people's names from opposing nations (Capella/Procyon) appear as colored numbers.

There are no NPCs in this map.

Shadowtitanium and Osmium grade armor and weapons are dropped by the monsters in Forgotten Ruin.
A comprehensive drop table provided by ESTsoft is found at: Forgotten Ruin Drop Table