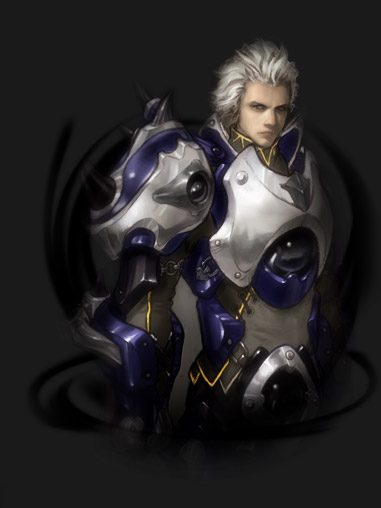 The invention of "Crystal" has created another possibility in force control. Force Shielders noticed that Force Archer's Astral Bow can efficiently support long-range force control, so they studied how to precisely condense force around Crystal so that the force would not disperse while attacking enemies, and created the Astral Shield as the result.

The creation of the Astral Shield opened a new chapter in the history of Nevarethian armor. The Astral Shield has such high defense strength that it can serve offensive purposes as well. Warriors and Bladers, who desperately needed a better way to fight and defend have become Force Shielders. They wanted higher defense as well as establishing their own unique battle style. Thus, they started using the heaviest armor such as Warrior's Armor Suit while carrying the Astral Shield.

Force Shielders specialize in short-range force control, which means that they are incapable of doing long-range attacks. However, they make up for this weakness by developing supporting magic spells which increase their attack strength by manipulating outer forces near their bodies. It's these methods which match those of the Wizard's strongest asset.

This revolutionary invention has become a turning point in the Nevarethian battle style. Force Shielders must invest a lot of their effort in physical strength in order to be equipped with Armor Suit, the strongest yet heaviest armor, as well as an understanding of force in order to skillfully control force. They also need to consider dexterity for decent hit rate since they can only use one-handed swords.

Experienced Force Shielders know various ways of manipulating Astral Shields, and can perfect their defense if they master in short-range force control.

Retrieved from "https://cabal.fandom.com/wiki/Force_Shielder?oldid=4339"
Community content is available under CC-BY-SA unless otherwise noted.