Cabal 2 was developed as a redesign of Cabal Online and runs on the CryEngine 3 platform. It keeps most of the classes from the original game, exchanging the Blader for the new Priest. It was developed by South Korean studio ESTsoft, Inc. The classes in the original game were gender locked, as they were in Cabal 2 at first. The developers have listened to the players and have made all 6 classes available to both male and female characters. The gameplay is linear and the maps are not connected together. In order to complete a map and move on, characters will need to progress through the map and complete a dungeon, thus allowing them into the next zone. This was based off early reviews so it could possibly change before launch. All the quests in a zone are said to be required for progression unless you are a player that simply enjoy grinding. Each map has a unique theme and creatures and are visually beautiful.

The character creation, while not as robust as some MMORPGs, still has a lot to offer including a small selection of sliders. The combat is combo chain based, so players will want to learn their combos very early in the game. Players are rewarded for combos with buffs and increased damage. The longer the combo, the better the reward. There is no auto attack feature because of the combo system and tab targeting is possible but in early videos, left much to be desired.

There is not much currently available for lore in this game. Hopefully more will be revealed soon. 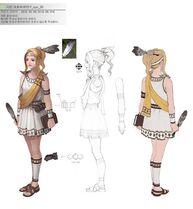 Add a photo to this gallery
Retrieved from "https://cabal.fandom.com/wiki/Cabal_2?oldid=4462"
Community content is available under CC-BY-SA unless otherwise noted.